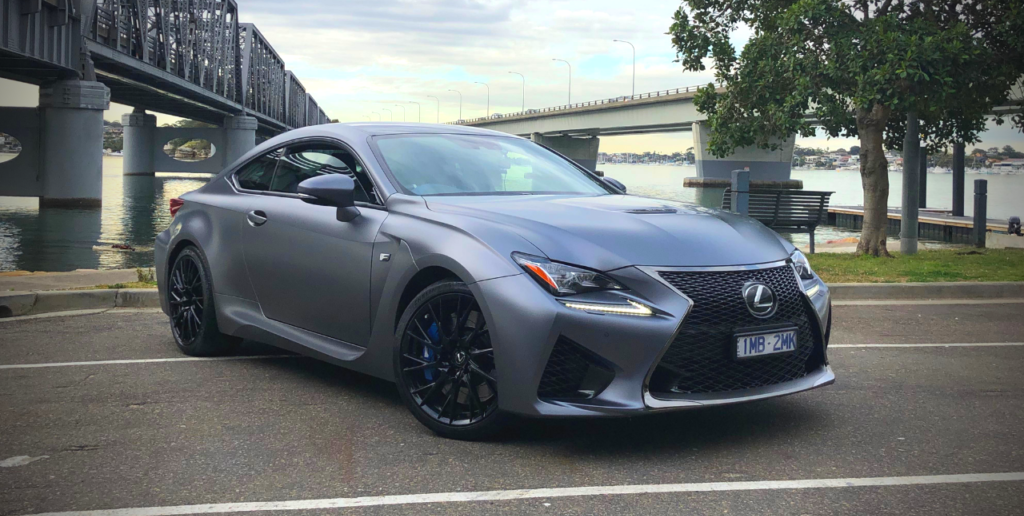 The RC F 10th Anniversary Edition boasts a carbon fibre roof and pop up rear wing, along with an elegant blue interior. The 5.0-litre V8 cranks out 351kW of power, however this is no improvement to the standard RC F. It glides over bumpy roads effortlessly, then roars into corners with ease. Some minor improvements would make the RC F a serious rival.

Inside: the interior is blue. Blue leather is used for the seats, door trims, centre console and parts of the dash, with black sections to provide some contrast. Black Alcantara is also applied to the centre console box for a softer, with blue carbon fibre for sections of the door trims. This model also gets a carbon fibre roof, and my favourite feature of all: a carbon fibre pop up rear wing! Not as cool as Bugatti’s design, but still pops up and down about 5-10cm’s automatically, or from the click of a button.

The RC F 10th Anniversary Edition is powered by the same 5.0-litre V8 found in the standard RC F. This same engine powers the Lexus GS F and LC500 amongst other older models. It has a whopping 351kW of power and 530Nm of torque.

Although this limited edition has no power bump over the standard model, these power figures are staggering, particularly given that this car has no forced induction, turbo/s, supercharger etc. Just a straight naturally aspirated V8. For comparison, the BMW M3 and M4, although lacking 2 cylinder 2-litres, put out 317kW, with an extra pair of turbochargers.

Turbochargers would easily enable this engine to push beyond 400kW, which might be needed given the weight of this chunky machine.

7100rpm is the figure for peak power, whilst peak torque is at 4800rpm. As you would expect with a naturally aspirated V8, a fair bit of revving is needed before peak power and torque kick in. And this is noticeable even with the exhaust note as it gets noticeably fiercer from 5000rpm onwards.

0-100kmh is completed in just 4.6 seconds. All that power goes straight to the rear wheels meaning it can be a bit difficult to tame if you put your foot down on the power to aggressively with some wheel spin/squeals, especially in the wet/dew. Compared to the GS F and the LC500 (who share the same engine), the RC F is the most unstable with the rear end wiggling more often than I would have liked.

At over 1800kg, it needs all that power it could ask for. For such a heavy car, it does incredibly well to handle itself with all that chunk. However, it isn’t as nimble as other coupes on the market.

It performs well around corners for its size, particularly in sport+ when the steering is tightened up. Lexus’s new Adaptive Variable Suspension (AVS) has 30 different levels of damping force governed by seven different program ‘strategies’. It adapts surprisingly well to each specific situation, although I would like the option to select the suspension settings on the screen.

This car was tested in all drive modes including eco, normal, sport and sport+ mode to compare the difference in performance. Eco is lame. Normal is best suited for daily driving, but it can take its time to drop the gears and take off. Sport mode is unreal, with gears held higher, shifts quicker, corners tighter. And sport+ mode, even better than sport mode. The ride firms up, but not to the extent that it’s uncomfortable, and enhances all performance aspects of the car. Power could kick in a bit earlier, but in manual mode, this things ready to launch when holding gears high.

The exhaust note could definitely be improved however. It needs cracks and pops! The LC500 sounds infinitely better (despite popping/crackling) as it offers a crisper sound. Even the GS F sounds slightly more aggressive.

Lexus claims fuel economy to be 10.9L/100km on the combined cycle. The RC F also has a 66 litre fuel tank. We would have thought this would have been bigger, given the V8 monster that lies under the bonnet, but also as the LC500 (with the same engine) has an 82 litre tank.

Our testing returned figures of around 14.5L/100km on the combined cycle. Pure city driving can see that rise to between 16-19L/100, contrasting to pure motorway driving which can drop to around 9-12L/100km. Perhaps cylinder deactivation might help lower these figures.

But then again, this is a 5.0-litre V8! This isn’t the car you buy to have performance AND economy, you can’t have it all. Expect to fill up frequently with premium fuel with this beast.

The interior of the RC F 10th Anniversary Edition is fitted with the beautifully luxurious blue leather and stitching. Further, the list of features in this car is longer than a Hollywood red carpet.

At the front, there are large, comfortable leather seats with a bucket-ish design. These seats provide a perfect compromise between comfort and racey weight saving bucket seats and were overall super comfy to sit in all day.

Both front seats are heated and cooled with 3 levels of heat/cooling power. The steering wheel can also be heated for those frosty winter mornings, much needed in the land down under.

No sunroof on this one, given that the roof is all carbon fibre. The roof lining has a cool pattern on the inside, however I wish it had more suede – just like you can find in its badder older brother the LC500 (first world problems).

The head unit is fairly large, but it is placed so far back that it’s unreachable by the driver. This is why the screen isn’t touch screen, but instead is controlled by the little mouse mechanism. This can get incredibly frustrating and a fair bit dangerous trying to manoeuvre mid driving. Ideally, the head unit could have been moved forward, with touch screen and Apple CarPlay/Android Auto. Lexus and Toyota really need to adapt these, and fast.

The rest of the interior is considerably comfortable. For 4 people, this car would be a tight squeeze and I can only recommend this for short drives. The boot space is remarkable for a coupe however and the car certainly makes you feel like you can cruise in luxury.

The Lexus RC F has not been tested by ANCAP, however the IS sedan received 5 stars.

We found the cruise control to do well in adapting to how close/far it remains from the car in front. The lane-keep assistance will happily keep you in your lane for up to 10 seconds before switching the system off (so it’s not a driverless car – well, for 10 seconds it can be).

The RC F comfortably handles a wide array of situations from bumpy, pot-hole infused roads, to windy national parks. Despite the profile of the tires being quite thin at 19 inches, it handles bumps with ease.

The RC F controls itself surprisingly well for an 1820kg machine. With any rear wheel drive car, it’s about controlling the exits around windy roads and making sure you don’t floor it too early. The RC F avoids getting uncontrollable quite well thanks to its torque vectoring and new Adaptive Variable Suspension, but be careful as it can get slippery.

The ride is much more responsive in Sport and Sport+, enhancing the thrill factor of the drive. The 8 speed gearbox easily goes through the gears with no hassles at all, similarly to the GS F and 10 speed gearbox in the LC500.

Servicing: There’s no capped-price servicing program with Lexus vehicles, but the first 12 month or 15,000km service is free, with the following 3 services costing $720.

This 10th Anniversary Edition costs an extra $14,200 on top of the standard RC F.

The RC F 10th Anniversary Edition comes with unique upgrades not seen in other competitors. The RC F has plenty of power, coupled with a luxurious and elegant design and interior.

The RC F handles itself responsibility but must be tamed when the throttle is hit too hard, too soon. The price is questionable as it sits in the M3 and C63S range.

Some weight reduction, extra power (perhaps from turbo’s?) and interior improvements would make the RC F, and the Lexus F brand, unstoppable.

ALL our videos of the RC F 10th Anniversary Edition:

All tech settings and modes: