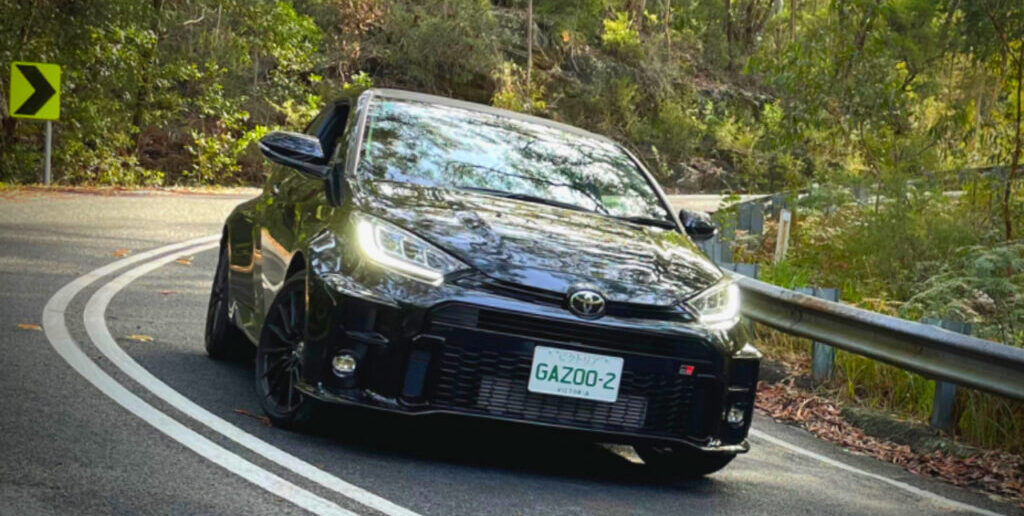 The GR Yaris is Toyota's rally car, turned street car. With the most powerful 3-cylinder engine in the world, the GR Yaris is a standout in its class. The limited run and uniqueness of the GR Yaris make it an instant classic, with Toyota putting all their efforts into this special machine. At 1280kg, the GR Yaris is light, nimble and ready to dominate the hot hatch market.

See ALL our GR Yaris videos at the bottom of this article.

The excitement for the GR Yaris has been unprecedented since Toyota announced that the project was going ahead. The GR Yaris is a genuinely special car, being built for the Gazoo Racing rally team with only 25,000 to be sold to the public. This GR Yaris is unique with the front end of a Yaris and the back end of a Corolla, making it essentially hand built.

Toyota released the first 1000 for $39K.. an absolute steal which I regret not following through with as the GR Yaris costs over $50k these days (and we can’t blame inflation purely for that)!

The GR Yaris is built on the production line that was used for the Lexus LFA, with an assembly room that acts almost like the car is having surgery. The GR Yaris takes 10x longer to build than the stock Yaris. Understandably, we were psyched to finally get our hands on this rally car pretending to be a street car, so here it is!

The GR Yaris packs one of the tightest, punchiest little engines out there. The GR Yaris is powered by a 1.6-litre 3-cylinder turbocharged engine, putting out 200kW of power at 6500rpm and 370Nm of torque between 3000-4600rpm.

Now here is the most important heading. If performance is what you are after, look no further. The performance features in the GR Yaris never end. Let’s begin with the drivetrain. This is the first all wheel drive system that Toyota has developed in over 20 years, made specifically for this car. And unlike many other hot hatches that have AWD, it is permanent on the GR Yaris.

In Normal mode, the GR Yaris sends 60% of the power to the front and 40% to the rear. In Sport mode, this changes to a completely different animal with 70% going to the rear and 30% to the front. In Track mode, it is a perfect 50/50 split. Each of these modes has its own unique advantages, but the most fun you’ll have is in Sport mode where the rear biased Yaris can dive head first into corners with minimal understeer.

The GR Yaris can get from 0-100kmh in 5.2 seconds, with many claiming better figures than this. It is also an incredibly tunable car with performance packed features everywhere. There is multi oil-jet piston cooling, machined intake ports and large-diameter exhaust valves, as well as an aluminium oil cooler and high-capacity water pump.

The single-scroll turbo uses ball-bearing internals to allow the turbo to spool up quicker, and it is noticeable. From 3000rpm onwards, the Yaris is ready to rock without any hesitation. The pistons are pent-roof for more efficient combustion, while shot-peening of surfaces and a resin coating for the piston skirt are claimed to reduce friction and improve durability. All this means that the GR Yaris is ready to rock and roll on any windy road, track, hill climb and so on.

The brakes are absolutely incredible. At the front are 356mm ventilated and grooved discs clamped with four-pot calipers.. To put this into perspective, these discs are larger than those on the GR Supra. And at the back are 297mm vented rotors with two pot calipers, along with high friction pads all round. These are wrapped in Dunlop Sport MAXX tires – opt for the Rallye GR Yaris and you’ll get your Michelin PS4 S tires. The brakes are direct with virtually zero fade, and help the tiny beast stop in no time.

Instead of the torsen beam on the standard Yaris, Toyota have opted for independent rear suspension. The track is also 6cm wider to improve cornering, and allow for flared wheel arches and upgraded aerodynamics. This little upgrade help give the GR Yaris that extra edge when cornering, particularly as this stock model lacks the LSD’s of the Rallye.

But this GR Yaris does not disappoint in any way, shape or form. Sure the Rallye may be more beneficial for hardcore track goers. But for any other setting, the stock GR Yaris is more than plenty. And I truly mean this when I say that this car will leave you smiling after any spirited drive. This is purely because the GR Yaris can cop so much before it becomes too hard to tame, it listens to everything you want it to do and controls itself magnificently. Track mode makes the GR Yaris feel as if it is on rails, despite the ever so slight understeer coming out of a tight bend.

The carbon polymer roof and plethora of lightweight aluminium help shave weight off the GR Yaris and it is noticeable when taken up to speed. Get the “Yaris” stigma out of your head, this is a true sports car. It will wipe the floor with almost all the front wheel drive competitors, and sound pretty tame doing so.

But apart from this, there isn’t really much else to fault here. The stock GR Yaris is a weapon in its own right and if you can’t make the jump to the Rallye (performance upgrade), you won’t be disappointed.

Toyota claims fuel consumption to be 7.6L/100km on the combined cycle. On the motorway, sure you can easily get below 6L/100km. Around town we saw over 10L/100km, but we do enjoy Sport mode at Talking Torque. And on a spirited drive (and this is what impressed me), the car returned just 16L/100km. Yes that’s high, but to be driven at the absolute limit and return that figure, I was impressed. The tank is only 50 litres, with a 2.1-litre sub-tank to ensure consistent fuel delivery. It does require premium 98 RON fuel. Toyota has had to abide by all these emissions standards and has done quite well to keep it efficient.

On that note (note, get it..), the GR Yaris could do with an exhaust upgrade. Emissions requirements have ruined the exhaust note and made it absolutely dull. Although Toyota has pumped sound from the engine bay artificially into the cabin (which is cool), it can’t replace the raw noise of the exhaust. No pops or bangs either, boo.

Inside, you are welcomed by suede bucket seats that hold you in nice and snug – useful for any track/spirited driving, and are comfortable for long drives too. The front two seats are also able to be heated with one heat setting. There is also dual climate control at the front.

The back seats on the other hand, well they’re much tighter. Due to the GR Yaris’ roof being 10cm lower at the rear and 5cm lower at the front (for aerodynamics, and also to allow them to fit a ridiculous spoiler in the World Rally Championship), space is tight at the back. Legroom is not too bad, but for taller people, over 6 ft, you may be touching the roof. And there are only two rear seats, not three.

As for the tech inside, the GR Yaris has a 7-inch infotainment system that has Apple CarPlay and Android Auto. It’s a simple system, one that Toyota uses in most of its other standard cars. The dashboard is analog for the speedometer and rev counter, with a small digital display that can show speed, fuel consumption, traction and a range of other options. The heads up display is a nifty addition to ensure eyes remain focused on the road.

The JBL speakers are fairly reasonable. They are crisp enough, but could pack more of a punch, and ensure greater clarity when the volume is a bit higher. There is only a single USB, with none at the back, and a 12V outlet at the front.

Boot capacity is limited with only 141 litres of storage, but this extends to 737 litres with the rear seats folded down. Toyota says this is enough to carry four spare tires on a track day. The reason the boot is so small is because the battery is placed underneath, cutting out a heap of storage space. Toyota did this to leave room for a high-volume air cleaner at the front.

The mirror is quite large and covers a heap of visibility down the centre of the windscreen. And there are hard plastics all around. But this doesn’t bother me. Sure, this isn’t the most luxurious interior compared to other competitors, but this doesn’t really bother me at all. I would be buying this to enjoy it as a nimble little weapon, with enough comfort features for me to live with, and most importantly.. a manual handbrake!

Despite all the performance talk, the GR Yaris still has all the safety features that you would expect from a reliable car such as this.

The standard Yaris scores a maximum five-star ANCAP safety rating, and although this one will not be tested, it still packs plenty of safety features for your peace of mind.

For a daily cruiser, the GR Yaris can get the job done fine. It can get a bit firm, but the excitement of the car genuinely makes you forget any of those downsides. On the motorway, it can get quite loud at high speeds in the cabin. Of course, chunkier cars will be more comfortable, but it’s the lightness of the GR Yaris that makes it so appealing.

For long commutes, it may get a bit cumbersome, but nothing hugely noticeable. It is still comfortable enough despite its firmness and rides incredibly well. The directness of the steering, the grip, the control, the torque available, all of this makes it a genuinely pleasurable drive in any condition.

Gear shifts are beautifully smooth. The gear stick is actually raised 5cm higher to enable quicker shifting from the wheel. The iMT button also activates auto rev matching, which is cool but, heel toeing is cooler (if you can manage it – there is a bit of distance from the brake and accelerator pedal, but my size 12 flipper feet managed it just fine). The chassis balance and response is exceptional and the synergy between this, the engine and gearbox is amazing.

Capped price servicing is available for the scheduled services every 12 months/15,000km, and cost just $205 each for the first five services. That’s it! I can’t get over how much car you get with this GR Yaris, and yet servicing costs less than any other standard entry level model. Again, well done Toyota.

This was perhaps one of the most enjoyable reviews. The uniqueness of this GR Yaris makes it so special and out of the ordinary. Compared to mass produced cars, you can sense the soul of Toyota pounding through the GR Yaris.

The amount of performance magic packed into this machine, for just $50K, is beyond belief. It’s ability to handle daily driving, and then transform into an absolute weapon on track, whilst remaining incredibly efficient, is truly phenomenal.

Toyota have made a rally car into a road car, and they have hit the nail on the head. A hot hatch from Toyota is what the world needed, and that’s exactly what we got, and more.

ALL our videos of the Toyota GR Yaris: