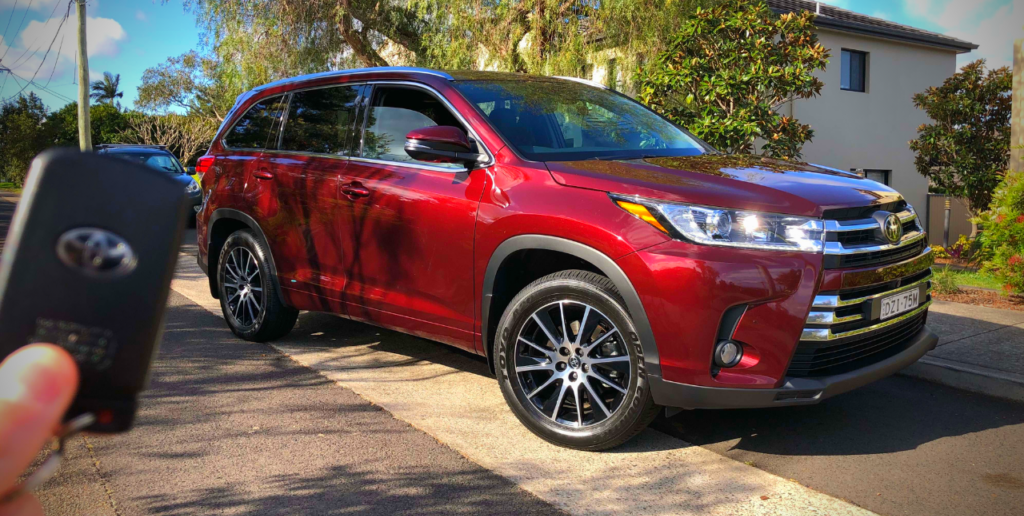 The Kluger is a stellar competitor in the large SUV market. It provides the reliability of Toyota, the power of a 200kW+ V6 engine, the space of an almost 5m long car and so much more. Minor improvements would assist the Kluger, but overall it performs remarkably.

The engine is lively and aggressive, which is exactly what you need to pull a two tonne SUV.

Given the sheer size of the Kluger, it won’t glue around corners, no SUV will, but it does well enough.

Peak torque is at 4700rpm. And as this is a naturally aspirated engine, it means no turbo lag – a huge advnatage versus many of the newer SUV’s with small 4 cylinder turbocharged engines.

The V6 provides instant power at any rev range, and when you put the pedal to the metal, it goes. It goes more than you would expect.

The Kluger’s engine is incredibly smooth and it’s no wonder that Toyota/Lexus have continued to use this engine for over a decade!

We tested this in various conditions to determine if this was true and to see how it went around town, on the motorway etc.

Urban driving returns around 14-15 litres/100km. Which isn’t bad at all given the size of the engine and the physical size of the vehicle.

A mixture of motorway and urban driving returned around the 12L/100km mark. Safe to bet that this will be your average consumption figure.

The Grande is the top of the line Kluger and gets all the bells and whistles.

The Grande gets a complete leather interior with hugely comfortable seating for all seven passengers.

The front two seats have heated and cooled seats that can be adjusted between level 1 to 3.

The legroom for the 3 rear seats/2nd row is incredible. This car could comfortably fit 3 full grown adults in the 2nd row with no issue at all.

Ideally, the front two seats could go a little further back to accommodate for lanky drivers like myself.

The 2nd and 3rd row also have a blu-ray player that pops down along with 3 wireless headphones that come standard. This screen is perfect for all passengers in the back and the sound can be played throughout the entire car.. However, blu-ray/dvd’s are rapidly becoming obsolete.

I admit that there is an SD card slot, but a USB port would have been ideal – a USB slot at the bottom to plug in a portable hard drive or other device, even a chromecast type option would be optimistic but effective.

The headunit is dated as is the dashboard with no digital speedo. Toyota must adapt CarPlay/Android Auto asap and update the old school head unit that has been around for almost a decade.

The bootspace is 195L with the two back seats up, or 529L with the seats down. The seats are hidden well in the 3rd row, but legroom is lacking – definitely a child’s seating area.

The Kluger Grande comes with the full suite of available active safety features, including: radar-based autonomous emergency braking that works at city and highway speeds – part of what Toyota calls its Pre-Collision Safety system. This is assissted by lane-keeping assist, blind-spot warning and rear-cross traffic alert.

The Kluger is also equipped with seven airbags, including driver knee bag and side curtain protection for all three rows, and it has three child-seat anchor points for the middle row of seats but none for the back row unfortunately.

The Kluger is an incredibly comfortable ride for 5 (of 7) passengers.

The Kluger sits on 245/55/R19 wheels which are indestructible, allowing the Kluger to bounce over any obstacle (almost).

It handles well and when in “PWR” mode, the Kluger definitely picks it up a notch, surprising even my mum who isn’t that interested in power.

This car has seriously impressed me with its ability to handle itself in such a huge form factor.

Toyota offers a 5 year/unlimited kilometre warranty, which is pretty impressive considering its earlier inability to move from its three-year warranty. Roadside assist is available from $89 per year, so you don’t get everything for nothing.

There’s mixed news when it comes to servicing. Each capped-price service will cost you a pitifully cheap $180, no matter what, for the first three years/60,000km.

The issue is that you have to come in every six months or 10,000km. Toyota offers the benefit of 90-minute servicing, which may convince you.

The 2 tonne towing capacity could be de-limited a bit further and the tech inside could be updated to become more modern.

Apart from these drawbacks, and the price of course, the Kluger is a stellar SUV option.

With the facelift Kluger due soon, these models are in runout, with $5000-$10000 discounts happening as we speak. If you aren’t fussed about the tech inside, then go for it now. Or alternatively wait for the new hybrid kluger.

ALL our videos of the Kluger: