You are at:Home»Reviews»Jeep Wrangler Overland review 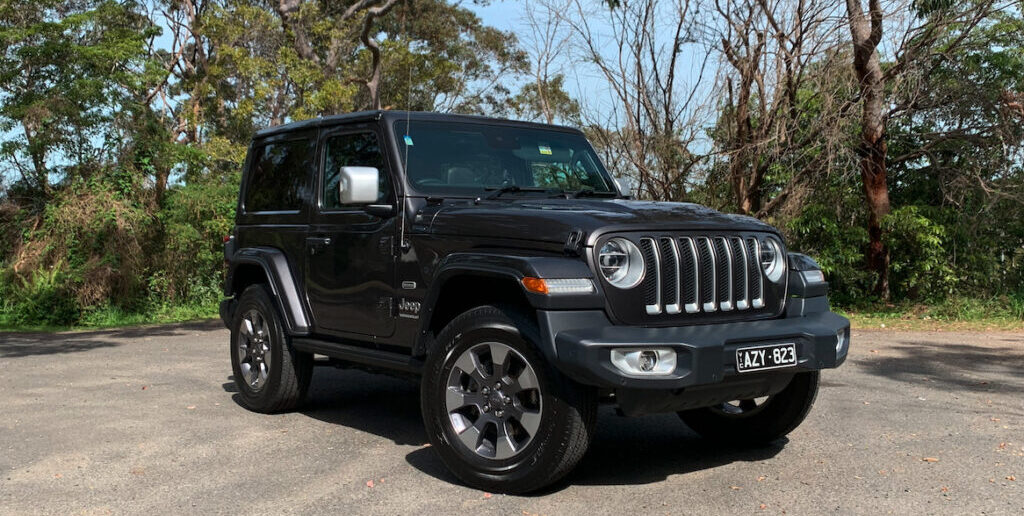 The new Wrangler Overland makes use of the Pentastar 3.6-litre naturally-aspirated V6 engine which puts out 209kW of power and 347Nm of torque.

The engine is coupled to a ZF-sources 8-speed automatic transmission which is a nifty update on the outgoing five-speed auto.

There is also a six-speed manual available overseas, as well as a 2.0-litre four-cylinder semi hybrid engine that puts out more torque – however, both of these options will not be arriving locally. Another plug-in hybrid and EcoDiesel have been introduced overseas, but yet to be confirmed in Australia.

Peak power comes in at 6400rpm with peak torque kicking in at 4100rpm. The free revving naturally aspirated engine allows the Wrangler to accelerate effortlessly without any turbo lag.

The power is surprising for a car of its statue and it’s ready to launch off the mark quite well. The front end of the car lifts itself noticeably upwards when taking off and the exhaust makes a neat grunty sound when launching, which is brilliantly exciting.

Power steering is from hydraulic assistance and the Wrangler also has a high steering ratio to help with off-roading.

This isn’t something that is usually discussed with an off-roader, but the handling around bends is as you would expect. It can feel a bit uneasy at times, but it certainly does grip better than some of the more larger models that need to lug around a bigger frame.

On rainy, damp days, the standard driving mode (which is rear wheel drive) can feel a bit unstable and quite scary around tight road.

Overall, the smaller size of the Wrangler Overland helps it perform better than its older siblings, and for a cube-shaped car, I can’t complain.

This is where the Wrangler Overland feels at home. The under-body skid plates and low-range gearing make it an easy off-roader that can take on most obstacles. The short wheelbase (2459mm) also helps it climb over objects effortlessly.

Whilst the top of the line Rubicon gets added off-roading features, that model only comes in five doors. Although the Rubicon flagship does get locking differentials, disconnecting sway bar, lower gear ratio and higher departure angle – something to think about if you are an intense off-roader.

But, the Wrangler Overland is still awesome enough for most scenarios and has a full-time four-wheel-drive mode. The gear stick for off-roading is placed next to the main shifter and requires a bit of heft to move it into place to avoid accidental knocks into low range mode (which happens in other cars).

The 255/70R18 tires are juicy enough to enjoy the off-roading life but also daily enough to commute around town.

The front bumper is also plastic making it easily replaceable if damaged off-road, and has a very respectable clearance to avoid any jarring. The car doesn’t feel like it would bottom out and is always insanely fun to engage off-roading.

The Wrangler Overland is the perfect mix between a hardcore off-roader and everyday commuter and that’s what I love about it.

Jeep claims fuel consumption to be 9.6L/100km which is respectable given its engine size, weight and aerodynamics – drag coefficient is 0.454.

Our testing returned on average 11-12L/100km which was a mixture of motorway, urban and city driving.

Pure highway driving saw this figure drop easily into the 6-7L/100km mark thanks to the eight-speed auto which keeps the revs low. And city driving consumption is assisted with auto stop-start.

Materials have much improved over the JK, along with the infotainment system that’s for sure.

There is soft touch plastic on the door trims, and leather looking stitching on top of the fast and in front of the passenger.

FCA has put in its uConnect infotainment system which is one of the best systems on the market – it is as responsive as we could hope, has Apple CarPlay/Android Auto and a heap of other nifty features.

The climate controls are below the head unit, but also available on the infotainment system and can be controlled easily and visually.

The front two seats can be heated with 3 different tiers of heat, as well as the steering wheel which is a nice American touch.

The seats are all leather and genuinely comfortable. The rear seats have enough space for a decently tall passenger and I was quite surprised by the legroom in the back despite the Wrangler Overland’s smaller form factor.

There are 9 Alpine Speakers which are truly one of the best features of the interior. The boxy shape might assist the acoustics (I’m no audio engineer), but the bass thumps so hard without overdoing it, or feeling like there is only bass playing. The mids and high are also as crisp as Smith’s chips.

A major upgrade is also the amount of charging points. Underneath the head unit is a USB 2.0 port, USB-C port and AUX port. Then another USB port is inside the armrest storage. And then another FOUR USB ports are in the back row (2x USB 2.0 and 2x USB-C). There is also a 230V AC outlet port at the back to plug in well.. anything you want, a kettle? Microwave? Go for it! These tech upgrades are a true selling point.

With the backseats down, there is only 197L of space which is quite small, maybe a few backpacks would fit. Folded though, this expands to 587L.

The top roof comes off with 4 easy clips and can be stored in the small boot (just). The doors and windscreen also come off (but only on private roads for legal reasons guys).

The JL comes in with a stellar interior that we thoroughly enjoyed exploring and a wide array of features making it a well equiped 2020+ vehicle.

The Wrangler used to have a 1-star ANCAP safety rating.

Since this disaster, Jeep has put in standard autonomous emergency braking with forward-collision warning, and active-cruise control which will come standard on the MY 2020 Sport S models and above.

It now has an ANCAP safety rating of three stars. Which is better, but not the best obviously (the rating is out of five).

The Overland comes standard with anti-lock brakes and front and front-side airbags. Rear cross-traffic alert is standard only on the Overland and Rubicon, while curtain airbags are not available on any of the Wranglers.

The Wrangler Overland rides incredibly well for its form factor. It faces steep competition in the SUV market and although it could handle more neatly, that is expected given the form factor.

The wheels do well do cop some of the burden on the road, but it can feel a bit bumpy after a while and the interior noise can get loud on high speed motorways, but only a few nitpicky points there.

The smooth gear changes and easy power make it an awesome ride and with a decent amount of legroom for rear passengers, it acts well as an everyday car.

The Wrangler requires servicing every 12 months or 12,000km, and Jeep now offers five years of capped-price servicing, with each service costing $399.

Great move from Jeep to keep running costs low for the first five years of ownership.

ALL our videos of the Wrangler Overland: