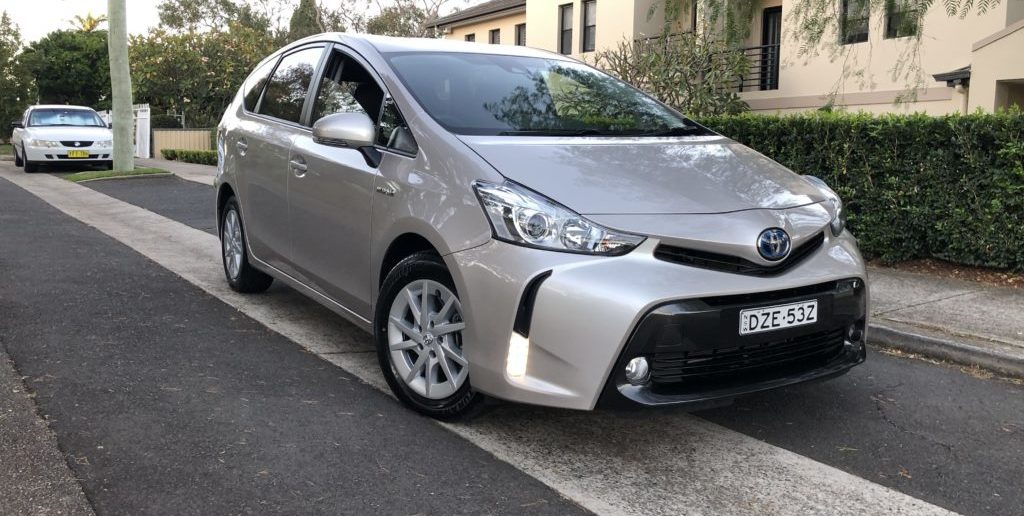 The Prius V is a spacious seven seater for the family that has plenty of features, but it is due for an urgent update. Technology is lacking, as is the design, the drive quality and several other features.

The Prius V is powered by a 1.8-litre four-cylinder engine, which uses a CVT auto and combines with a lithium-ion battery and two electric motors. Also known as a series parallel hybrid set-up.

The car can run using both the battery and engine, or just the battery, or have the regenerative braking system feed the battery pack more juice. But we have seen this technology for some time now.

The engine can produce 100kW of power and 142Nm of torque. The electric motor can produce 73kW on its own, however the maximum combined power output is still only 100kW.

The electric motor can in theory produce a 73kW, but the car does not let it as the petrol engine automatically kicks in once the electric motor has done an ever so slight of a job in moving the vehicle.

This heading isn’t exactly suitable for this car as it lacks any form of performance, but that would not be the reason you buy this car.

Toyota claims fuel consumption to be at 4.4L/100km. But we were fairly off that figure. It was still brilliant nonetheless, but could be a bit better. In city driving, it hit as high as 7-8.0L/100km. Mixed driving, with more highway driving saw around 5-6.0L/100km.

These figures were similar to the petrol Corolla we tested recently. But I guess this is a much larger, 7-seater so it does well in that respect.

The one thing it was missing was a larger electric battery. I know for a fact that the car could be some incredible consumption figures if it had a larger battery/motor. The issue is that the electric engine is used at low speeds which helps lower consumption, however the petrol engine kicks in after barely 10kmh.

The Camry Hybrid we tested lasted longer in electric mode which saw incredible fuel figures. The battery has the capacity to push on in EV mode for longer, but the car doesn’t want to allow it. There is more potential with the hybrid here is what I’m saying.

That 6.1-inch touchscreen is okay, but fairly outdated. It has some small menu buttons, won’t allow anybody to connect to Bluetooth when the car is moving, and sat nav details cannot be manually entered whilst driving. There is voice control, but it’s subpar. Forget Apple CarPlay and Android Auto, too – Toyota is still yet to adopt this tech locally.

The dashboard is placed central between the driver and passenger and has a digital speedo, fuel consumption, trip odometer and a small screen that can show the audio functions, compass and some other info. I wish it had a rev counter though. There is a heads up display which is great!

Now onto.. boot space! With seven seats in place – Toyota claims 180 litres of capacity in that configuration – still enough room for a backpack or two, small items as such. With five seats (the 2 back row seats folded down), it opens up much more space, easily fitting things like large suitcases and prams with its 485L of cargo capacity. A space-saver spare wheel can be found as well.

That second row is nicely designed. We liked the 3 individual seats that are separated between each other and kids won’t be fighting over seat space. There are also sun shade blinds in the two rear windows, suitable for children as well. However, the car lacks air vents in the second and third rows of the vehicle.

There are cup holders, 12V outlets and pockets in the back. But we wish there were more USB ports throughout the car apart from just the single port at the front. Some other family cars we have driven have had up to 4 USB ports + 2x 12V ports.

The Prius V gets a 5-star ANCAP safety rating.

There are dual front, driver knee and front side airbags, along with airbags along the curtain of the second and third rows.

The cruise control we found to be okay as it did not adapt very well and responded quite late to traffic. It also switched off automatically quite often. The lane departure also struggled to be ‘active’ in holding the car in place, it is definitely a warning system and not active.

The Prius V rides quite well for a relatively low grounded family car. It is comfortable with plenty of people inside, however can get a bit dizzy for passengers as it does not plant itself well into the tarmac.

It struggles to hold itself together around standard bends unfortunately and can understeer to a bad degree should you choose to push the vehicle. Although this isn’t a car you would be flying around corners in. It can fit the family and do it well. The 3rd row does need some more legroom, but that’s the same with any 7 seater.

The warranty cover is three years or 100,000km for the car, but the hybrid battery comes with an eight-year/160,000km cover of its own.

Toyota lists its charges at just $140 per visit to the dealer under the Service Advantage offer, however you will need to take it in every six months/10,000km.

The Prius does relatively well in terms of providing a spacious, economical, cheap to run vehicle for the family. But it could be better. Technology needs upgrading all round – it seems as though this car is just a partsmith for any spare parts left behind.

The design is also something that definitely needs an urgent update. It is a comfortable ride but can be concerning at times around bends and takes far too long to accelerate. With a few necessary changes, it could be an incredible vehicle.

ALL our videos of the Prius V: