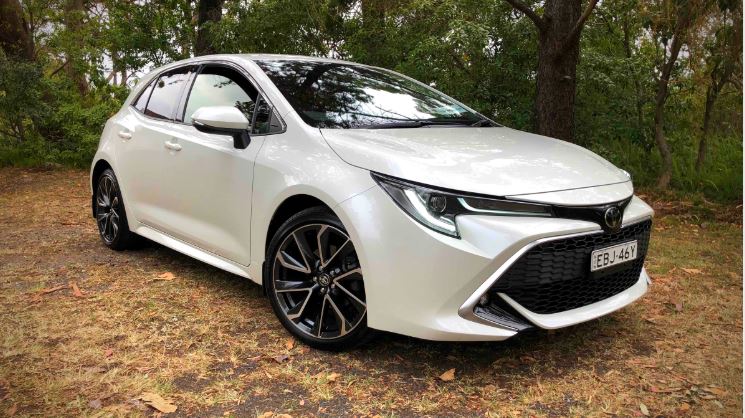 The Corolla ZR petrol is powered by a much improved 125kW petrol engine, and has a wide range of features as the top-of-the-line including an 8-speaker JBL system, leather accented seats and interior, heads up display and larger, more attractive rims.

The new Corolla gets a fresh new range of engines, beginning with the base petrol engine with an upgraded 2.0-litre engine. This new engine puts out 125kW of power at 6600rpm and 200Nm of torque at 4400rpm.

Then there is the hybrid engine which is powered by a 1.8-litre four cylinder petrol engine that puts out 73kW of power, coupled with a 53kW electric motor – combined output of 90kW.

Our tester had the automatic gearbox which is the only option available with the ZR prytol. Gearbox is a CVT (constantly variable transmission), but has a novel torque converter on the dedicated launch gear, meaning take-offs are sharper.

The engine handles itself well and can pull when it needs to. It has enough juice to overtake effortlessly, particularly as you notably hear the engine pushing itself to its limits. It does however lack the extra torque of turbocharged competitors – perhaps something for Toyota to look into in the future.

Overall, we found ourselves incredibly impressed with the new engine. The bump to 125kW is much needed and helps the car get torquey with its 200Nm.

While it lacks the extra push that a turbo rival would boast, the engine is incredibly smooth, and powers through the gears effortlessly.

The petrol Corolla will take 8.5 seconds to go from 0-100km/h, which is fairly impressive considering the previous generations could barely do it in 10-11 seconds. Again, the power and torque improvements on this model are fantastic.

The Hybrid model is well, less impressive. Tested figures see the Hybrid hit 100 in around 12.5 seconds. The electric motor helps get the hybrid to 60 in just 5 odd seconds, but the juice runs out by that point and the lonesome petrol engine takes its time to kick up.

Around some windy roads, the Corolla ZR can grip itself without an abundance of understeer. Of course you will get some understeer and skidding from a front wheel, but this Corolla holds itself together surprisingly well.

The tires are 225/40/R18 and are Sport tires you see on hot hatches – they help keep the car super planted and grippy.

Overall, the car performs surprisingly well. Mazda 3, Kia Cerato and the Hyundai i30 should watch out for the new Corolla as it takes a seriously big leap for the Corolla.

Toyota claims combined-cycle fuel use of 6.0L/100km, with the tank measuring 50L to the maximum.

Better yet, the engine can run on 91RON fuel which is the cheapest to run and the car will have no dramas doing so.

In our testing, we compared the difference between using 91RON, Premium 95 and Premium 98 fuel. These were all filled up from the exact same service station to ensure consistency.

After filling up with 91, the car felt exactly as it was when we had first gotten it, and we managed to average about 8.5L/100km on the combined cycle, with a fair bit more motorway driving. We were able to get the car to about 600km before the fuel light came on.

Once filled up with 95 and 98 several times, there was a slight, but barely noticeable increase in performance – it just felt that ever bit so slightly smoother. But not enough to justify an extra 20% in fuel costs, especially when the car takes 91RON with no dramas at all.

It must be noted that in pure urban driving, the consumption figure jumped to over 10.0L/100km which is standard for a small hatch that pushes its engine hard, but not near the 6.0L/10-km figure.

The steering wheel feels quite sharp, and the integration of its cruise control and audio buttons is fairly intuitive. The instruments are simple, and the digital trip dash makes things neat along with a heads up display!

The seats are trimmed in leather and our version had the red accented leather which was insanely comfortably with a bucket feel and heated seating. Only the ZR gets the leather.

Also, the fascia layout is modern with a mounted tablet screen above a digital AC readout, all operated by sleek buttons and knobs.

Materials inside the vehicle include soft plastic and cloth on key touchpoints, as well as leather/faux leather, to the glossy black contrast panels.

There are also well thought out storage areas such as the phone cubby below the fascia which has wireless charging. There is also a 2.1A USB charger in the centre console and the USB port for AUX which also charges – so you could technically charge 3 devices at once!

This is the last version not to have CarPlay/Android Auto, so it has an 8 inch display but it’s not very functional. Although, the Bluetooth is incredibly quick and reconnects almost instantaneously when hopping back in the car.

The 8-speaker JBL system is great though. For a small hatch, the 8-speakers fit so well to provide the perfect punch in the car whilst still maintaining crisp mids and highs.

The seat for the driver and passenger is fairly decent, but if you are a reasonably tall person that needs leg space up front, you will inevitably push your chair a bit back, which can make it quite cramped for the rear passengers.

Further, the boot space is tiny. Sure it comes with a spare wheel, but it’s almost as if the spare wheel isn’t lowered into the base of the car, instead it takes up half of the space of what would be the normal boot.

The ZR definitely gets a fair few improvements that make your driving experiences a fair bit more enjoyable and worth the upgrades over the SX and Ascent Sport.

Without dispute however, Toyota has not cut corners on safety and protection. Beyond the full suite of airbags and five-star ANCAP crash rating, the Ascent Sport also gets a long list of technologies that fall under the Toyota Safety Sense bracket.

These include:
– autonomous emergency braking (AEB) that works at all legal speeds
– adaptive cruise control
– road-sign assist
– lane-departure alert
– lane-trace assist system that helps physically keep the car in the lane if your mind wanders

The AEB started beeping at reasonable speeds before approaching slowing down cars, and the system did well to point out cars slowing down.

Adaptive cruise control was great. Utilising the same radar, it would speed up and slow down with ease.

The lane departure alert is incredibly supportive, and beeps like crazy when you drift out of your lane. The lane-trace assist holds the car in its lane for up to around 5 seconds before it beeps and deactivates itself. Hyundai’s can hold in the lane for up to around 20 seconds, but perhaps this is worse? The Toyota system is just for that extra bit of safety, which I like as we should not depend on these systems – they are there as an aid.

The ZR petrol rides well with its power jump and awesome tires, as well as all the comfort features on the inside that help.

The ZR petrol keeps itself together around bends surprisingly well and is incredibly comfortable to ride in. I found myself not worrying about potholes as the car just bounced over them with ease.

A fairly comfortable ride with many major improvements that we were impressed with. And that unreal design on the ZR with newer rims.

Toyota allows for longer servicing intervals of 12 months or 15,000km, with the first handful of visits capped to just $175 each.

That goes a long way to offsetting the sub-par warranty term of three years/100,000km.

The Corolla ZR petrol is an incredibly predictable car but in the best way possible. Fuel use is cheap, services are affordable, it has minimal known issues, comfortable to ride in, has plenty of technology and doesn’t cost an arm and a leg.

It handles itself well and provides a great option as an entry level hatchback that will get the job done and not be a hassle in the process.

ALL our videos of the Corolla ZR Petrol: