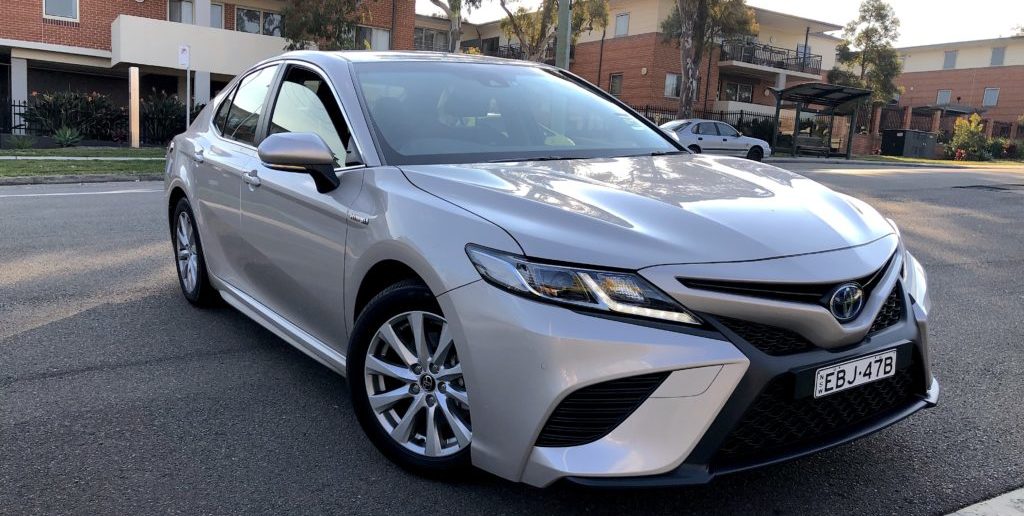 The new Camry is not what it used to be in any way, shape or form. Apart from being built overseas, it has been completely redesigned with sharper lines, sleek edges and an overall more aggressive stance. The model reviewed is the Camry Hybrid Ascent Sport, which sits above the Ascent but below the SL.

The new Camry has taken a turn for the better with huge improvements in almost all categories. Firstly, it isn’t made in Australia anymore. Secondly, it has been completely redesigned with sharper lines, sleek edges and an overall more aggressive stance. We took out the Camry and drove around 2500km so we got a fairly good feel of the vehicle. This model is the Ascent Sport trim with the Hybrid engine.

The Camry Hybrid is powered by the petrol and electric motor which provides greater performance and improved efficiency.

The petrol powered part of the engine is a 2.5-litre four-cylinder engine that puts out 131kW of power and 221Nm of torque, coupled with an electric motor that combines power output to 160kW!

And that 160kW is hugely noticeable. At peak power, both petrol and electric engine will be working in unison to provide the absolute most amount of power. Given the weight of the vehicle, and that it is a heavy saloon, it could do with a little more power.

The battery itself is magnificent. Comparative to the Prius, the Camry Hybrid seems to provide much, MUCH more juice in EV mode. The Prius would be able to get to about 10kmh before requiring the petrol engine to kick in.. Not the case with the Camry. With a light right foot, it could easily get to 30/40kmh before needing the petrol engine to kick in. This leads to improved fuel economy figures and a smoother/quieter drive for longer periods of time. This is, of course, if the battery is charged up enough, but we found the battery to charge up incredibly quickly from regenerative braking.

Given the size of the vehicle, it will feel a bit.. Boat ish. But, for its stature and form factor it control itself very nicely. The combination of both motors ensures the Camry Hybrid has enough kick throughout the low and mid end to pull away in the overtaking lane.

The electric motor does its job well in the low end with instant torque, till more power is needed when the petrol engine kicks in. The car pulls itself together quite well and has enough grunt. Despite some body roll from its front-wheel chassis and large footprint, the Camry performs quite well for what it is.

Flooring it will not throw you back in your seat, but it does relatively well in comparison to many other base level hybrids. I wish that in EV mode it would let me utilise the full force of the battery however and get one mega acceleration in one quick hit. As soon as the car senses that you have pushed the accelerator too hard (which is basically more than 25% throttle), the petrol engine kicks in.

The Camry Hybrid’s point of differentiation is the fuel economy. Toyota claims consumption of 4.2L/100km – how close we got will be revealed below.

As previously mentioned, it would be nice to have a stronger/more longer lasting EV mode, perhaps a larger battery would solve this. Regardless, the car is still incredibly fuel efficient.

We drove a mix of motorway and city driving and averaged 5.0L/100km. Oddly, we found slightly better results in the city. This makes sense as the vehicle utilises the electric motor from about 0-40kmh which in city driving is about 80-90% of the speeds you would hit.

This contrasted to motorway driving which we found to be primarily petrol engine power. Given the high speed (100kmh+), the EV motor would not kick in for long periods of time, meaning petrol power needed to be used on the motorway most of the time. Sure, motorway driving doesn’t use much fuel anyway, but it was still a tiny bit more than in the city.

Overall, 5.0L/100km is the average you would return from a mix of all driving, leading to about 900-1000km on a single tank! We filled up about 45 litres before the fuel light even came on. The car is marvellous with that decent sized tank that will get some people over a month of driving without filling up.

This model does not get all the luxury add-ons that the SL/SX would get such as leather seats, sun roof, heated seats, Qi charging, plenty of speakers etc.

Again, Toyota is lacking CarPlay/Android Auto integration into their systems. The system itself was, okay. Bluetooth was very quick in connecting, although it got a bit conflicted several times when bluetooth and USB are connected to the same phone. On that note about USB, there is only one USB port for the entire vehicle. We have tested some other vehicles with 4+ USB ports and believe 2 should be a minimum (first world problems right?).

The speakers are okay as well but nothing spectacular. The bass is hardly noticeable but the mids and highs are decent for the price tag/trim of the car.

Keyless entry does work incredibly well, but it didn’t seem to work when walking away from the car. The purpose of having keyless is to chuck your keys in your bag and never have to struggle finding them, but having to lock the car defeats the purpose of this (again.. first world problems).

Toyota has been reluctant to adopt CarPlay due to privacy concerns, but we expect to see it on models in the near future. The screen still utilises a resistive touch screen and can get a bit frustrating.

The space in the car is great though! The front two seats have plenty of space, a HUGE middle compartment and enough space under the screen in the little hideaway storage area.

The Camry Range gets a 5-Star ANCAP safety rating.

The cruise control speeds and slows down well in relation to traffic around you. However, the lane keeping could be improved. It claims to have active lane keeping assist, but it simply just beeps when departing the lane and does not do well in keeping the vehicle inside the lane.

On a rainy day, the radar stopped working altogether and the dash said “please clean radar”. This stopped all cruise control and lane keeping features, but went back to normal the next time it was used.

The thick profile wheels provide for a comfortable and effortless ride in the Camry. It is responsive yet subtle and spacious for the entire family.

Props to Toyota for making the new Camry’s much more sportier whilst still maintaining the spacious cabin and comfortable interior/ride.

The car is a comfortable cruiser for the whole family. If SUVs are not your thing or simply too expensive, this car is an incredibly alternative for the family.

Toyota’s capped-price servicing program limits the first five years of servicing (or 75,000km) to $195 per service which is incredibly respectable and the cheapest for capped price services.

The Camry is an efficient, reliable, cheap to run car that provides enough room and comfort for the entire family and reasonable grunt for its size.

It handles itself well, has plenty of features and can fit 5 people comfortably. The hybrid powertrain is impressive but could do with a bit more juice in the battery. Kinetic energy regeneration is the perfect balance between economy, power and cost, as seen with this vehicle.