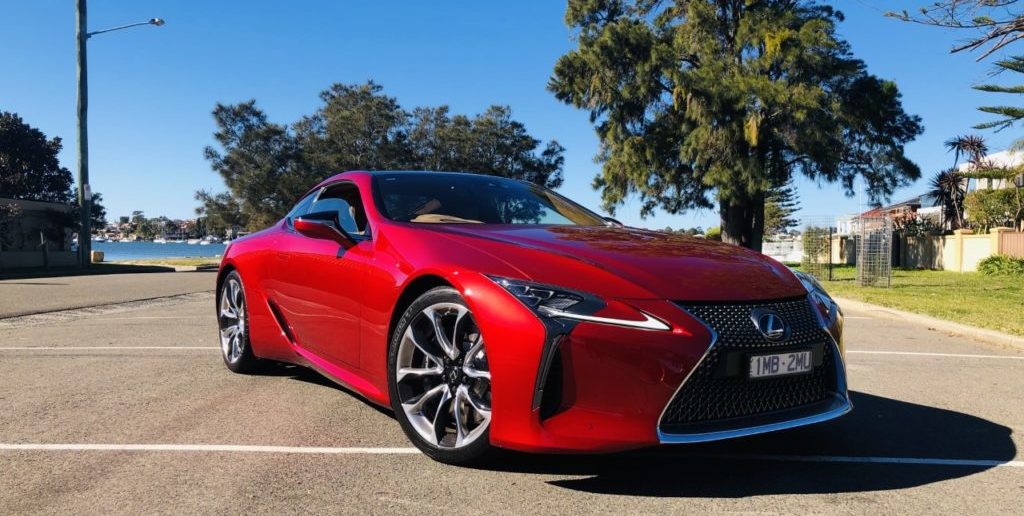 The LC500 is a car that can be tame, comfortable and luxurious one moment, and ferociously aggressive the next. The naturally aspirated V8 lacks the power from rivals, but provides instant power at any given moment. The LC500 is packed with features and sounds unbelievable. The experience behind the wheel of the LC500 makes you keep coming back for more and more.

The LC500 is one of the most rewarding driving experiences one could ask for. We weren’t sure what to expect when we got our hands on this, would it be like the LFA, or like the GSF; would it be boring and dull or exciting and tenacious? The LC500 naming confused us as it lacks the “F” branding.. Nonetheless, this was one of the most exciting review journeys we have been on.

The Lexus LC500 shocked us completely. On paper there is absolutely no way this car can compete with its competitors, and it has flaws.. But none of this matters once you get behind the wheel. As a luxury grand tourer, this is perhaps one of the most exciting cars you could have, and without a doubt one of the most visually appealing. The beautifully crafted interior, high revving V8, loud exhaust, and refined finishes made this an absolute dream of a car.

So Lexus, thank you for making this not-so-LFA machine that made us smile for the several weeks we had it. It isn’t the quickest, or lightest, or loudest, but that really doesn’t matter. It truly is a wonderful ride that can be pushed to the absolute limit, or constrastingly used as a comfortable cruiser around town and on the motorway. It does both jobs perfectly.

The LC500 is powered by Lexus’ infamous 5.0-litre V8. This is the same engine used in the GS F, RC F and the older IS F models. This V8 monster puts out 351kW of power and 530Nm of torque. These figures are hugely impressive for an engine that lacks forced induction (turbo’s) like its competitors.

This is paired to a 10 speed automatic gearbox (no manual option) with flappy paddles. The engine is responsive in the mid to high end, but can take its time warming up in the low end. Despite this, given its naturally aspirated prowess, it is ready to launch immediately without any lag.

The 5.0-litre V8 is brilliant as it is one of the few cars remaining that has a naturally aspirated V8. Well done to Lexus for keeping it classic, I know for a fact many people love the simplicity of this engine – reinforced by its continued and ongoing success.

The exhaust sound is unreal in the LC. Revving high lets off a tasteful whine that you hear in other supercars, followed by, what I deem, the “Supercar Snap” when changing gears. The note is much more crisp than the GS F which utilises the same engine. It could however do with more cracks and pops though, petrol heads love those farty sounds.. Please Lexus, it is one of the few things this car needs.

No turbo lag, no problems. Although modern supercars do well to minimise turbo lag, a naturally aspirated V8 will ALWAYS be ready to pounce. This makes the LC500 a dream ride.

Sure, it lacks sheer power compared to the competitors such as the BMW 6 Series and Mercedes SL which pack multiple turbochargers. However, this makes the car even more exciting on a day to day basis as the throttle can be pushed harder without serious concerns of losing control (in the dry).

The LC500 can hit 100kmh from standstill in 4.7 seconds. Again, this isn’t the quickest in comparison to its competitors, but the almost 2 tonne grand tourer does well to hold its own given that the LC500 packs an extra 160kg over the 6 Series.

For a car that weighs almost 2 tonnes, the LC500 holds itself together neatly. Sport and Sport+ mode open up a world of opportunity. The gear changes are lightning quick, down shifts are rev matched, suspension firms up and so on. The Adaptive Variable Suspension works wonders, however there is no option to choose suspension settings.

The traction control does incredibly well to tame the 2 tonne beast. Around corners, early throttle on exit can cause some slight oversteer – however, this is when traction control and the AVS do well to keep the car in check.

The front end is razor sharp and points in where you want it to, and the rear follows suit without much fuss thanks to the grip provided by the Michelin Pilot Super Sport tyres wrapped around the ENORMOUS 21-inch wheels. The tires profile are, 245/40/21 at the front and 275/35/21 at the rear.

This car performed so well that we were left puzzled whether it was focused on being luxury based, or performance based.

We tested this in multiple conditions for varying periods and weren’t surprised by the figures given the weight, stature and engine displacement of this machine.

This is relatively decent given the footprint that this chunky machine has, along with the naturally aspirated V8 engine that has minimal help in terms of lowering fuel consumption.

The inside of the LC500 is exactly as you would expect – comfortable, lush, luxurious, feature packed, and just plain elegant. The seats can be heated and cooled on three different strength settings.

The interior is covered by either leather or suede. The LC500 we reviewed had the tan coloured interior, which is questionable. I initially thought to myself, I would much rather plain white with black stitching, till I realised how easily that would get dirty. Update after driving for just over a week, I have now fallen in love with the tan/brown interior.. The suede is also beautiful inside.

The Mark Levinson system puts out 930 watts or thereabouts and certainly packs a punch. Sure, the GS F has 17 speakers, and the LS500h has 23 or something ridiculous, but this is a 2+2 and 13 is more than enough given the smaller cabin size.

The 10.3 inch screen looks great, but it is too tucked away and the touchpad is infuriating. The head unit needs to be pushed forward and offer touch screen. And CarPlay! Please adopt this asap Lexus.

The back seats are there for the sake of being there. We tested the back seats with several different people and the shortest person still hit their head on the roof at the back. The leg space is bearable, but only for short rides.

Another first world problem: the GS F has a heated steering wheel and this does not – I got used to the GS F’s heated steering wheel in the middle of Australian winter. The bootspace is 197L. This is much more compared to other supercars but could pack a bit more space in their given that this is more of a luxurious grand tourer.

Despite these very minor pitfalls, the LC500 comes packed with so many features that you will be discovering months later. I love the manual knob to change into Sport/Sport+ mode and to turn traction off, along with the elegant touches and finishes inside. This car truly makes you feel ‘luxe’.

The active cruise control/lane assist surprised me! I expected it to cut out fairly quickly after not holding the wheel for long enough.. Which it did around bendy roads. But on a relatively straight motorway, it kept going for almost a minute (until I got scared and took back control).

It has plenty of safety equipment, along with exceptional traction control. Be careful when switching it off, this beast is hard to tame.

The LC500 is potentially one of the most comfortable ‘supercars’ on the market. I daily drove this machine for enough time to realise that I could easily use this as my every day car (could I afford it).

The huge tyres provide plenty of cushioning despite its low ride height. I barely felt bumps on the road which I would normally feel in hot hatches. This car truly drives like a dream and I was so impressed with the way it handled itself in a wide range of day to day scenarios.

The Adaptive Variable Suspension works wonders to find the most suitable suspension mode for every situation. The LC500 doesn’t mind cruising at comfortable speeds, but then when needed, it’s ready to pounce at any given moment.

Sure, the back two seats are in no way comfortable, but at least it has them. You wouldn’t think it would have 4 seats by seeing this car from the outside, but it is a nice touch to be able to fit 4 people in there, even if they have to sandwich themselves in.

The feel of this car is exceptional and the ride quality is at the top end in this market. The feel of the LC500 is just plain enjoyable.

The LC500 is covered by Lexus’ four-year/unlimited-kilometre warranty.

The actual experience of driving the LC500 is nothing like we have ever experienced from Lexus (apart from the LFA). The LC500 actually shares a lot in common, in terms of both development and build process. Lexus has stated that many of those who built the LFA now build the LC500. In fact, the LC500 is the first car to be built in the same factory as the LFA.

The fact that the LC500 resembles so similarly to its wicked, spaceship looking prototype all the time ago makes me happy. They have stuck to the classic V8 engine that has worked for so many years and nailed it. Sure it’s down on power compared to other competitors, but that doesn’t matter.

This car allows you to roam in luxury one second, then roar with anger the next. This car has split personality disorder and I love it. A few minor tweaks in future could help push the LC500 out of such a niche market as it truly deserves more recognition.

All tech settings and modes: