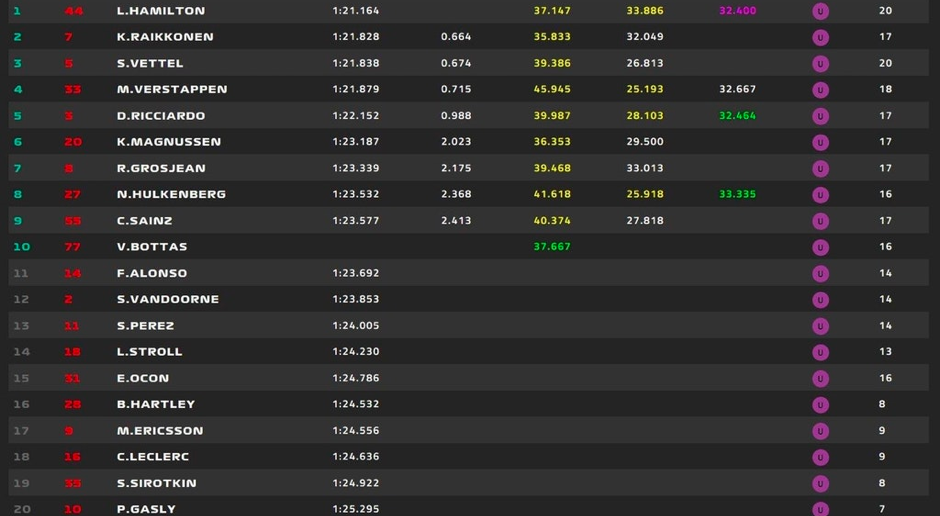 • Hamilton Finds Another Gear:
Lewis Hamilton has come out and reminded everybody why he’s World-Class behind the wheel. In his final lap for Q3 he outclassed everybody around him in an extremely tight top-5. Mercedes clearly had another gear in them when Q3 rolled around and it shows that if the rest of the field wants to take the fight to Mercedes, they’ll not only have to overcome a top-tier car, but a top-tier driver.

• Bottas Crashes Out:
Valtteri Bottas has not has a desirable start to the 2018 season after he crashed out at the start of Q3 in the first few minutes. Bottas lost traction in the first turn of the track and didn’t recover, causing a red flag to come out during Hamilton’s out-lap. In what is a pivotal year for Bottas’ Mercedes future, this is not the way he’d like to start the season.

• Ferrari Fend Off Red Bull:
The conditions were set up for a typical Red Bull showing, however Ferrari ensured positions 2-3 were secured. In what appears to be a frustrating result for Red Bull, compounded by Ricciardo’s grid penalty from FP3, they’ll have a lot to do tomorrow if they want to start the season strong.

• Haas Stamp Authority on the Midfield:
Haas have shown they are not to be taken lightly this year by finishing 6-7. This result will particularly frustrate McLaren who looked to have a strong chance at finishing high in the mid-field during Q1 and Q2.

• Toro Rosso Struggle:
Hartley and Gasly were only able to secure positions 16 and 20, respectively. This result is not desirable for a team who this-time last year were in the position Haas appear to be this year. Whether this is down to poor strategic planning for the qualifying session or a lack of engine power from Honda is yet to be known, however if these results continue to occur, Red Bull may have cause for concern for the 2019 season.