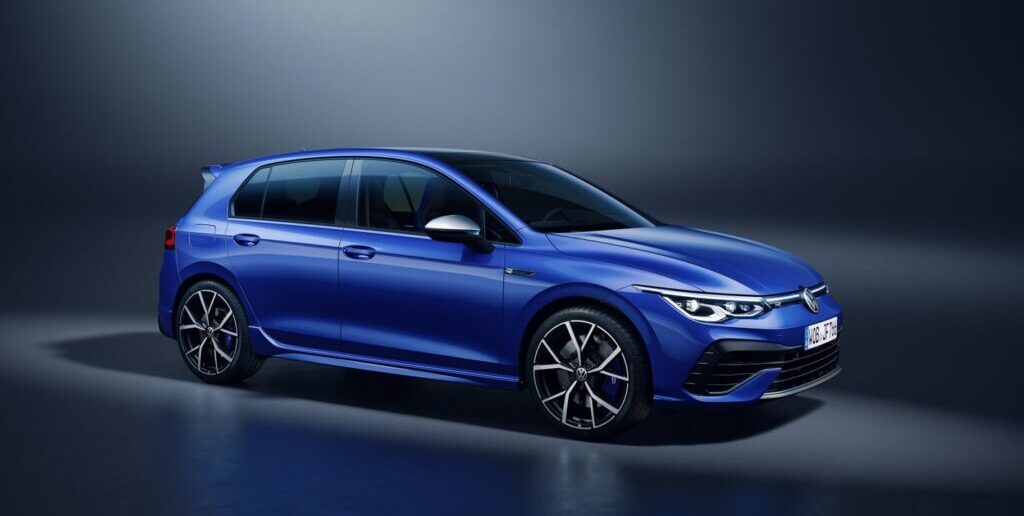 The new Golf R sports the same 2.0 litre ‘EA888’ turbo 4 cylinder petrol engine that the previous Golf had, but with upgrades that create 235kW, or 320hp and 420Nm of torque.

Power is sent to all four wheels via either a six-speed manual or a seven-speed dual-clutch automatic transmission, although the manual option will be limited to North American Markets. Regardless, let’s rejoice that the manual IS staying in the lineup (for now).

The Golf R shares the same new generation Haldex-type all wheel drive system as the Arteon R and Tiguan R, with Torque Vectoring that allows up to 100 per cent of the engine’s torque to be distributed between the front and rear axles or between each individual rear wheel in milliseconds.

VW claims a 0-100km/h acceleration time of 4.7 seconds and has an electronically limited speed of 250km/h. This makes the new Golf R a quicker accelerating car than the Civic Type R, BMW M135i, Megane RS and more.

The R includes the same ‘Vehicle Dynamics Manager’ system as the GTI, which controls the ‘XDS’ electronically-controlled front locking differential, all wheel drive system, and has ‘DCC’ adaptive dampers for driving dynamics.

Then we have: DRIFT MODE. This sends some of the engine’s torque to the rear axle to break traction and enable controlled drifts. Sweet as.

Filling the arches are the 18 inch alloy wheels with the 19 inch model wrapped in Michelin Pilot Sport Cup 2 performance rubber available as an option. Behind the wheels are larger performance brakes, measuring 358mm up front and clamped by two piston aluminium callipers.

Then we have the popping Akrapovic exhaust system that pops and bangs, and shaves off a neat 7kg as well.

On the outside is a restyled front bumper, a more aggressive rear diffuser, quad exhaust tips, larger side skirts, a larger rear spoiler a blue accented LED light strip across the front fascia and a bunch of R badges.

Inside includes R-badged leather trimmed sports seats, a flat-bottomed steering wheel with an easy to access ‘R’ button for race mode, metallic petals, paddle shifters for automatic models and a blue stitching throughout the cabin.

Australian customers will need to wait until 2022 to drive the new hot hatch on Aussie roads.