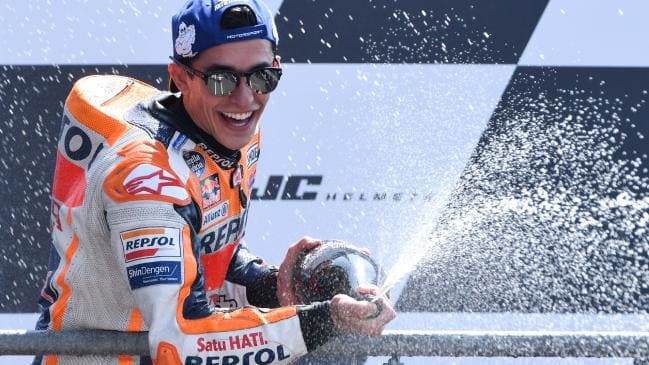 Marc Marquez is justifying his lead in the MotoGP World Championship as he took the lead at the Grand Prix de France at Le Mans ahead of Danilo Petrucci and Valentino Rossi, benefitting from both pole man Johann Zarco and title rival Andrea Dovizioso crashing out early in the race.

The results means Marquez now has a 36 point lead just five races into the season.

“I saw that the track had a little bit less grip than yesterday and especially this morning,” said Marquez.

“But I’m happy because this victory is important on a circuit where normally we struggle.”

Zarco had the 105,000 home fans at Le Mans’ Bugatti circuit dreaming of a rare French win after his record-setting pole 24 hours earlier, but the Yamaha star slid out on Lap 7, breaking the hearts of all French fans.

“I overdid it trying to overtake Lorenzo,” said Zarco. “The fans will understand me, I was going all out for the win,” he said.

Jack Miller posted one of his best results in MotoGP with a fourth placing, chasing Rossi all the way home and only just failing to snag a spot on the podium.