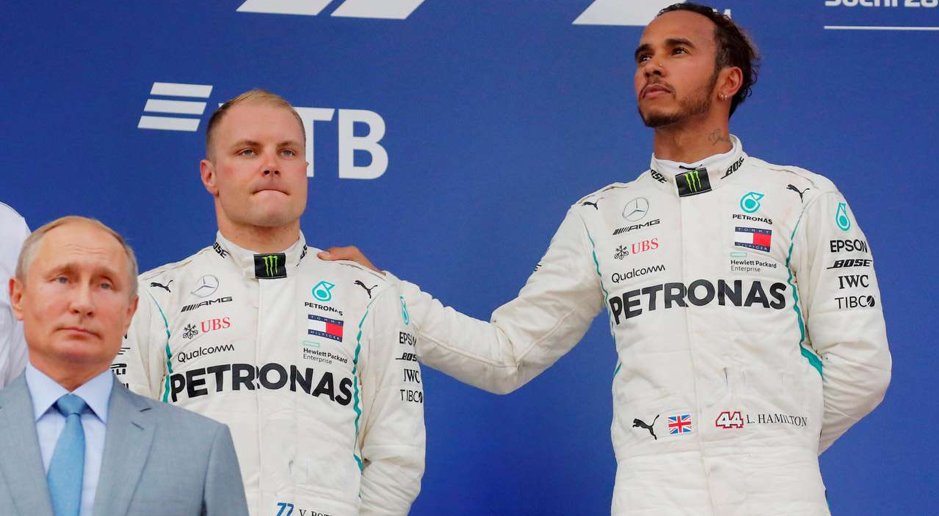 F1’s visit to Sochi came to a controversial conclusion yesterday as Lewis Hamilton took P1 after Valterri Bottas was ordered by Mercedes to let Hamilton through and concede his first-place position. Mercedes extend their reach at the top of the WDC and WCC after Ferrari, bar one moment of tactical brilliance, failed to mount a serious challenge. There’s a lot to sink our teeth into in this week’s F1 Weekly Roundup:

• Mercedes Team Orders Cause Controversy:
As we touched on, Mercedes enforced team orders on their two drivers in order to extend Lewis’ gap at the top of the WDC even further than what was looking to be the likely result. Bottas was controlling the field at the front while Lewis was feeling pressure from Vettel behind him. During the race, Mercedes informed Bottas the switch was to preserve Lewis’ tyres after a blister appeared, however Mercedes later informed Valtteri he would not get the position back. Many argue team orders ruin the sport’s competitive edge, whilst others see the tactical necessity of Mercedes doing what needed to be done for the greater good.

• Verstappen Shines in Sochi:
Max Verstappen put in a Driver of the Day performance in Sochi as he started from P19, led majority of the race (albeit extending his first stint before a pitstop), and went on to secure a successful P5 finish. Verstappen’s daring, yet mature, approach to the race left many watching, including the Sky Sports announcing team, in awe as he caused headaches for everybody, including Mercedes. His teammate, Daniel Ricciardo, suffered from mechanical issues with his front wing early in the race which caused him to fall far behind his teammate, however Daniel was still able to secure P6.

• Leclerc Dominates the Midfield:
Charles Leclerc reminded the F1 World why he was chosen by Ferrari to inherit the second seat beside Sebastian Vettel with a stunning drive in the Sauber which saw him finish P7, ahead of Ocon and Magnussen. Where Force India, Renault and Haas were scrapping it out for a points finish, Leclerc emerged early in the race and worked his way to a desirable position. Marcus Ericcson, after news he would take a reduced role in the team next season, finished in P13. Sauber are continuing to grow, and this will likely continue into next season as Giovinazzi and Raikkonen were announced as the new driver line-up.