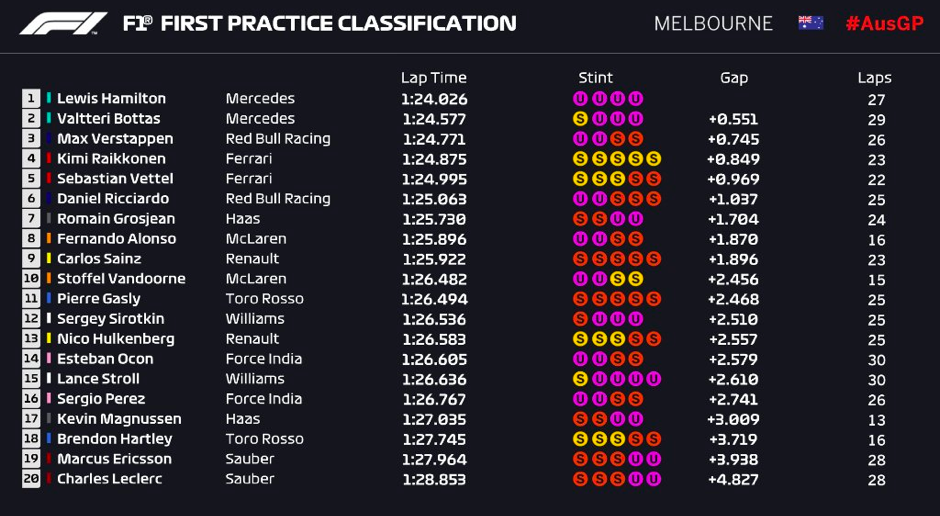 The first practice session in Melbourne, Australia has concluded, and we are so happy to have F1 back. Whilst there is still much to be uncovered in what this season has to come, here are some of the takeaways so far:

• Mercedes Dominance:
Whilst we must remember that this is only the first practice session of the season, early results in Practice 1 suggest that Mercedes are in a comfortable position. Hamilton topped the boards with Bottas half a second trailing. We hope that the discrepancy between Mercedes and the rest of the field is not the sole story for the season.

• McLaren Middle of the Field:
Whilst it is still early days for the season ahead, McLaren/Honda’s partnership ending doesn’t look like it will pay immediate dividends for McLaren. McLaren fans would have hoped that there would be a visible increase as soon as possible, however we have a whole season ahead, and we hope McLaren can develop further.

• Mercedes Test Ultras Whilst Ferrari Test Softs:
Some of the discrepancy between Mercedes and Ferrari in this session can be attributed to the tyres being tested between both teams. It would be irresponsible to infer too much from the choices thus far, however Hamilton and Bottas have put in more laps on primarily ultras whilst Ferrari have done slightly less on Softs for the first session.

• Sauber At The Bottom:
The fortunes of Sauber do not appear they will change to a significant degree from last season. It is premature to draw conclusions, however both drivers sit at the bottom of the grid in the first session despite using Ultras. We hope this gap can be reduced before Q1.